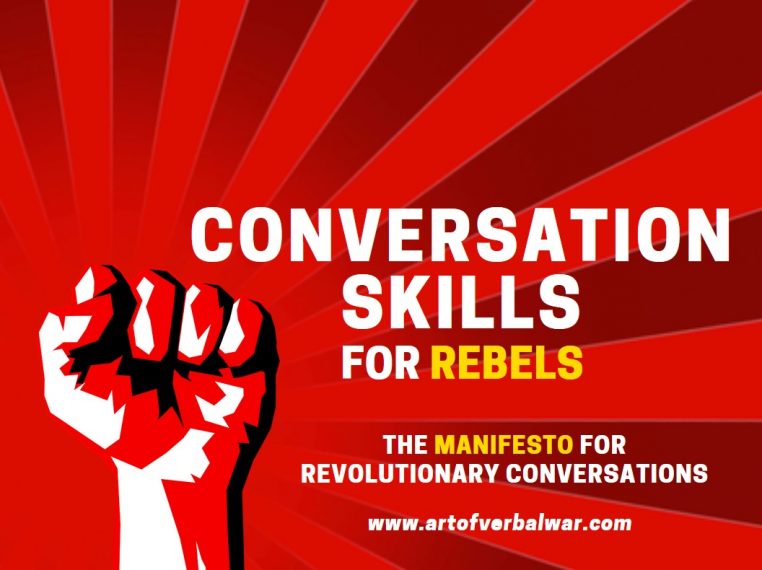 Its time for a revolution in conversation skills advice. We’ve been misled by the existing “regime” and I’m here to set you all straight.

“People will never forgive you (if they even notice you) for being boring.”
-Fredrik Eklund

A Rundown of Conventional Conversation Advice

As a verbal skills coach, I get numerous e-mails and messages every month from readers and subscribers asking me how to improve their conversation skills.

It seems like many people are struggling with this area of verbal skills. And, yet we wonder why?

So, let me recap for you the conventional conversation advice that is out there, tips that I’m sure most of you have heard before (and maybe even tried):

I’m sure you’ve seen and read these bits of advice many times, right?

And, I bet you even tried quite a few of these tips in your real life conversations.

I sure don’t and I bet neither do you. We don’t do mediocre around here.

Let me debunk for you each of the eight common conversation tips that I laid out above:

While it is not wrong to be interested in other people and their lives, how does this advice actually improve your own conversation skills?

The reality: What this advice does is transform you into a passive participant in a conversation, but it sure doesn’t make you into a better conversationalist.

Similar to the first tip, this advice does not make you a better conversationalist and it also makes you a passive participant. I hate these first two tips the most because they are probably the two most well known conversation “tips”, yet all they do is to make you into someone who places the burden of making conversation on other people.

Don’t ever put the burden of making conversation on others.

You need to start taking OWNERSHIP of every conversation that you get in from here on out, and that means going far beyond mere listening.

Somebody who asks lots of questions in conversation is most likely somebody who has nothing to say, no value to give, and again, burdens others with the responsibility of leading the conversation.

But, this is not the case.

While this is not terrible advice, the problem with memorizing “good” conversation topics and conversation starters is that it lacks flexibility.

A topic that seems interesting to you could be like a sleeping pill to someone else. A conversation starter may work well in one situation, but be completely useless in another.

Knowing “good” topics and starters is not the panacea you may think it is.

Just like “good” conversation topics, sharing your passions and interests have the same fundamental problem. Your interests may not be other people’s interests.

Even more egregious than that, when you talk too much about your passions and interests, especially in an aimless way, the conversation becomes a one-way street and not a two-way exchange.

It is all the rage right now to hear advice about how you “should tell stories”.

Yes, stories can be quite fascinating and interesting.

However, as with anything else, most people take things to extremes and they will tell stories aimlessly or go so far with their storytelling that it becomes a one-way street (just like people talking about their passions and interests).

It is okay to tell stories, but only when stories serve a specific purpose within the context of a conversation, and not just for the sake of telling stories.

Being too polite, politically correct, and inoffensive is the biggest killer of a dynamic conversation.

I can’t think of a type of conversation I dislike more than one where all the participants are afraid to say anything even remotely edgy.

Some people like to think “deep conversations” are the best and only kind of conversations that people should have.

At least 95% of the time, I prefer to have a different type of conversation than a “deep conversation”, which you will learn about now. I don’t know about you, but I’m so done with conventional conversation advice.

Go ahead and cling to this gospel if you think this advice helps you. It never helped me at all.

My conversation skills never improved when I followed this advice. All it led me to have was mundane, uninteresting conversations with people, including those with girls.

It’s time for a revolution in conversational skills!

Let’s talk about how we can overthrow the conventional wisdom on conversation skills. Instead of conforming the existing “regime”, it’s time to rebel and create a new paradigm for conversations.

So, here are the eight principles for conversation revolutionaries that I want you to memorize if you want to EXCEL at conversation skills and become someone that EVERYBODY wants to talk to and have conversations with:

1. Instead of being so damn interested in others, focus on being interesting YOURSELF.

2. Instead of trying so hard to be a good listener, focus on HAVING SOMETHING TO SAY.

3. Instead of asking lots of questions, use questions INFREQUENTLY and only in certain specific situations.

4. Instead of worrying about knowing good conversation topics and starters, learn HOW TO TALK ABOUT ANYTHING IN AN INTERESTING WAY and HOW TO CREATE A SPECIAL CONVERSATION OUT OF NOTHING.

5. Instead of sharing your passions and interests in a monologue-type of conversation, learn to CREATE TWO-WAY CONVERSATIONS that get everybody else involved.

6. Instead of telling aimless, pointless stories, tell stories in a PURPOSEFUL FASHION.

7. Instead of worrying about being polite and inoffensive, you need to GET A BIT EDGY with your conversations going forward.

Do you want to know HOW to implement each of these eight principles?

If so, click HERE to get my free special report, The Manifesto For Revolutionary Conversations.

NEVER HAVE ANOTHER MUNDANE CONVERSATION AGAIN!

Previous Post How To Increase Your Verbal Fluency Next Post The Verbal Skills Library: Books You Should Read