The Donald Trump Guide To Being a (Not So “Great”) Speaker 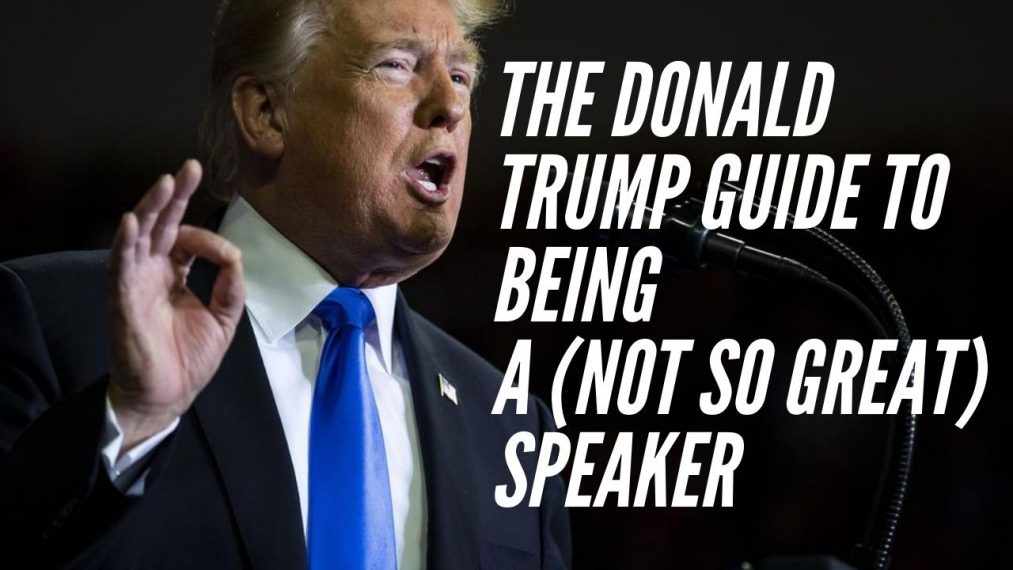 Donald Trump is known for a “great” many things, including Teflon-like powers in avoiding impeachment, amazing gravity-defying hair, and especially for wanting to make America great again.

But, one thing he’s not known for is being a great speaker, as you will see in this article and related video.

In this article, you will learn the six very bad speaking habits of Donald Trump.

By the end of the article, you will know how you can transform yourself from a mediocre speaker to a very good speaker with just a few simple tweaks.

The 80/20 Rule of Becoming a Better Speaker

When it comes to becoming a great speaker, the famous “80/20 Rule” applies.

But basically, 80% of your progress towards becoming a great speaker comes from just 20% of your activities and effort.

This article is about those 20% of activities that you can implement now that will make most of the difference in becoming a better speaker.

Those 20% of activities are not what you think.

They don’t involve any fancy techniques, vocabulary, or other things.

You don’t need to learn any new metaphors, any new presentation skills, hand gestures, or any other fancy things like that.

You just need to work diligently on a few small things.

This is the most important point of this article right now:

Becoming a great speaker is actually more about ELIMINATING bad habits as opposed to implementing anything new.

In particular, you can become a really good speaker merely by eliminating six specific bad habits.

Some of these bad habits are pretty obvious. You might even know some of them already.

Some are less obvious.

But regardless, these six specific bad habits are extremely prevalent and most people on this planet are guilty of at least one (or all of them).

You need to ruthlessly cut these six bad speaking habits out if you want to be perceived as an excellent speaker and someone who is good at words by other people.

When it comes to these six bad speaking habits, Donald Trump is up there with the best of them.

Or maybe I should say, the worst of them?!

Take a look at this video and you will see how often Donald Trump resorts to the six awful speaking habits.

I use President Trump here not really to make fun of him, but more to illustrate the credibility and authority killing power of these six bad speaking habits.

(These bad speaking habits are so credibility killing that they can even take down the President of the United States!)

So, let us not only Make America Great Again, but let us make you a better speaker while we’re at it!

Filler words are words that people use when they’re searching for the right words to say (or anything to say at all).

People usually use filler words at the beginning or middle of a sentence (or thought).

The most common filler words are: um, uh, er, ah, like, you know.

People use filler words when they’re trying to buy some time while they think of what to say.

The use of filler words in speaking make you sound unconvincing and lacking knowledge on your subject.

Hesitations are similar to filler words.

Hesitations are used by people when they are trying to buy some time between thoughts in order to think about what to say next.

Keep in mind, hesitations can be more than just one word, they can be an entire phrase.

Some common hesitations are:

What I’m trying to say is…

At the end of the day…

Again, just like filler words, you want to cut out hesitations as much as possible. Of course it’s not easy in practice, so you will need to be ruthless with yourself about this.

You don’t have to get crazy with this, but minimize filler words and hesitations as much as you can and you will be considered a much better speaker immediately.

Repetitions are a subset of hesitations.

Instead of using specific hesitation words such as “And…” or “So…”, a speaker might just repeat what they just said in order to buy some time.

People, and especially Donald Trump, use repetitions especially when they do not know what they are talking about.

Repetitions are just another way of buying some time to think about what you are saying.

Filler words, hesitations, and repetitions are like an unholy triumverate of poor speaking habits.

They really signal to other people that you do not quite know what you are talking about, so if you can minimize these three bad habits, you will have go a very long way towards becoming a great speaker.

In another post of mine called “Great Speakers Never Use These Two Vocal Tonalities“, I wrote about a vocal tonality called the “searching tonality“.

Go and check that article out if you haven’t, but basically, this one vocal tonality is extremely bad to use when you speak.

The “searching” tonality signals to other people that you are unsure about what you are talking about even though you very well might know.

Go to 1:39 of this video if you want to hear what it sounds like:

When you play poker, some players give off obvious “tells” that they’re bluffing.

And when you see these tells, you know they’re lying about what kind of hand they’re holding.

Just like in poker, in speaking people give off “tells” that they’re not necessarily telling the truth or they’re not knowledgeable about what they’re talking about.

The “tells” that a mediocre speaker may give off are the following words/phrases:

“To be honest with you…”

Using these tells in speech are like a subconscious compensation for lack of knowledge or in certain cases with certain people, lack of truth!

“Chunking” is my own made up term for speaking just one or two words at a time repeatedly, instead of speaking in free-flowing longer phrases.

This happens when a speaker in having trouble producing words freely because they are thinking about what to say next and/or when they do not know what they’re talking about.

Check out the video above to see some examples of chunking as this one is hard to describe in words.

As you can see, all six of these bad speaking habits are just “honest signals” of certain negative things such as:

Now that you know the six bad habits of speaking, focus on eliminating them or minimizing them as much as you can.

If and when you do that, I promise that other people will start perceiving you as a MUCH better speaker and communicator.

And once you get to that level, you can only become an even greater speaker.

The Million Dollar Mouth: How To Speak So People Give a F-ck

But, HOW do you become an even greater speaker?!

Well, there is SO much more about learning to how to speak so that people listen to you.

Eliminating the six bad speaking habits is 80% of your progress, but there is that extra 20% that will take you from GOOD to GREAT.

In order to go from GOOD to GREAT, however, you will have to go beyond just eliminating bad habits. You will need to take on some NEW HABITS, including some new tricks of the trade in order to GRAB and KEEP attention and captivate people when you speak.

You will want to become someone that people WANT to listen to, like a Gary Vee or Oprah.

I didn’t even have to say their full name, and you know who they are, right? There’s a reason for that.

That is because they are captivating, they always have your attention, and when they speak, people REALLY give a f–k.

My new program, The Million Dollar Mouth: How To Speak So People Give a F-ck, will teach you everything you need to know to GRAB and KEEP people’s attention when you speak.

This program is that other 20% that will take you from GOOD to GREAT.