How To Test Your Verbal Fluency 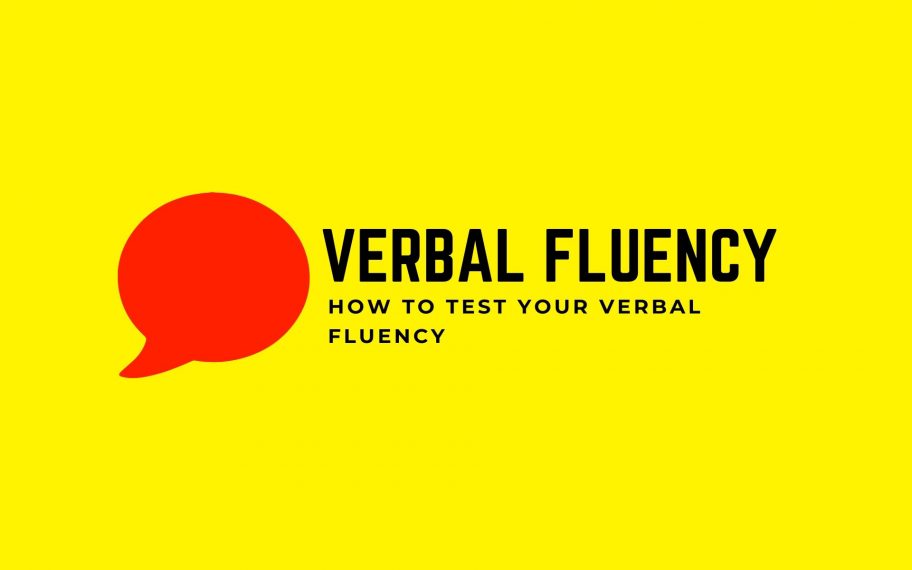 You very well might want to because verbal fluency is absolutely crucial to having better verbal skills and being a better communicator.

It never hurts to have better and higher verbal fluency.

Verbal fluency is, in layperson terms, the ease with which you can access and verbalize your mental vocabulary.

Or, to put it another way: the ease with which a person can produce words.

The better your verbal fluency is, the more potential you have to become a great speaker or communicator.  That’s because words come to you very easily.

And if your verbal fluency is poor, you can barely put one word together with another one.

I hope that’s not you, but if you find that words don’t generally come to you very easily, don’t worry!

By poring through the scientific literature, I have discovered up to twenty exercises that can train your verbal fluency.

So, are you ready to test your verbal fluency?!

Awesome, we’re going to do two different verbal fluency tests today, which are the most basic tests used by practitioners to assess people’s verbal fluency.

Let’s get started with test number one, which is called Semantic Fluency.  Right now, I want you to get a watch out, set it to 60 seconds, and also bring out your smartphone and hit record in an audio memo:

List all of the animals you can think of in the next 60 seconds.  Then, do it again with food as your category.

Listen to the audio file you just recorded.  Add up the total number of words in the two rounds and divide by two. That is your average.  Do not count repeats.

Add up the total number of words and divide by three.  That is your average.  Do not count repeats and do not count proper nouns like names of places or people.

How To Interpret Your Results

Now, let’s talk your results and how they might compare to others:

Test One tests your “semantic/category fluency” which is a measure of executive functioning and overall language ability.

Test Two tests your “phonetic/letter fluency” and according to researchers is a shortcut (albeit not a complete) method to assess your cognitive functioning.

From what I have seen in reviewing the scientific research, there is no scientific consensus on what a “good” score is.

Researchers have only focused on what a “poor” score might be.

From the scientific research out there, most practitioners believe that less than 14 or 15 in any given test may be indicative of a cognitive or problem.  Some practitioners go up to 17.

Now, I’m sure many of you are you younger than 65, so many of you scored higher than 22, which is great.

You can find scores that many other people have posted in this video:

There is no established baseline for what’s considered average, good, or great, but of course, the higher the better.

In other words, there is no well-established result for what is considered a great score, just some general guidance about what is a score low enough for doctors or practitioners to be concerned or worried.

But again, the higher the better.

SO PLEASE POST YOUR SCORE (AGE, GENDER, AND YOUR SCORE FOR THE TWO TESTS) IN THE COMMENTS, SO THAT WE HAVE A RUNNING RECORD OF SCORES FOR PEOPLE TO TRACK THEIR RESULTS (AND PROGRESS) AGAINST!

THIS IS SO WE CAN START UNDERSTANDING WHAT AVERAGE, GOOD, OR GREAT SCORES ARE. THANK YOU!

A higher score is better because it merely means you have an easier time accessing and verbalizing your mental vocabulary. You want to jack it up as high as possible (and keep it that way) for as long as possible.

If you scored less than 14 or 15, you may want to consider seeing a doctor to be evaluated further for cognitive issues.

Now, if you didn’t do as well as you hoped, or you want to do better than you did, then you will need to find ways to get some verbal fluency improvement for yourself.

Maybe some of them work, but most likely, they won’t work well.

And if they did work well, they might have longer-term effects on your body or brain that are less than ideal.

So, for me, nootropics are a no go.

But, that is okay!

Like I said earlier, verbal fluency is trainable. I do not believe in regular use of nootropics.

That starts with the two exercises laid out for you in this article, but also extends to many other exercises that you can do.

Do them every day while you’re driving to/from work. Or, even when you’re sitting on the can. 😀

With these exercises, you will want to assess and track your verbal fluency improvement over time against the baseline you set today.

First, whenever you do these verbal fluency exercises, remember to do them OUT LOUD. What I mean by this is actually verbalize the words. It is NOT sufficient to do these exercises in your head. You must make sure to speak the words out loud!

For a preview of my verbal fluency training program, go to: www.artofverbalwar.com/vf