How True Is The Saying “It’s Not What You Say, But How You Say It?” 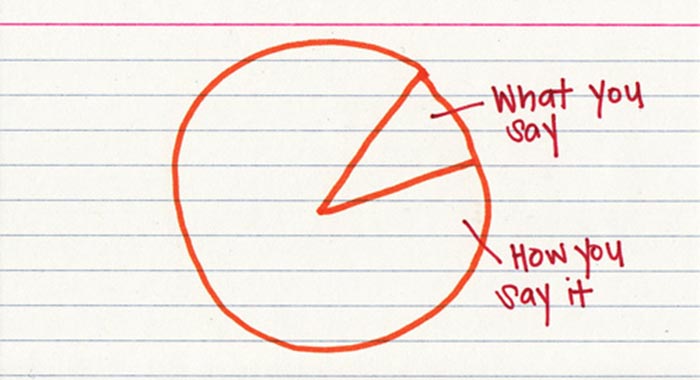 The saying “It’s not what you say, but how you say it” is now commonly known as a shoutout to the power of non-verbal communications. However, in my experience this saying is at best, incomplete and at worst, somewhat inaccurate, especially when it comes to the art of being a great speaker or communicator.

When it comes to being a great speaker or communicator, there is no question that non-verbal communications matter a lot.

There have been research studies showing that “HOW” you say something matters up to 8-9x more than “WHAT” you say.

But, over time, I have come to realize that while the HOW you say something matters a lot, the WHAT you say also matters a lot.

And, there is MORE to being a great speaker and communicator than just WHAT you say and HOW you say it.

The reason I say this is how many times have you said something you thought would make an impact (such as in conversation, persuasion, or public speaking), and you said the right words and use the most badass non-verbal communications, yet you failed to make the impact you thought you would make?

For me, countless times. And I’m sure you’ve experienced that as well.

And, that’s because there is a big part missing in the advice “It’s not what you say, but how you say it.”

In this article, you will learn why the saying “It’s not what you say, but how you say it” isn’t completely accurate, and what this saying really should be, especially if you wish to be a speaker that people give a damn about.

If you want to be a great conversationalist, persuader, public speaker, or just somebody who speaks for a living, then you should pay attention.

The “WHAT” you say refers to things such as:

I don’t care what “studies” you can show me. Only a fool would think that these things, i.e. the WHAT, don’t matter.

The WHAT matters more than you think.

Choosing what words to use and choosing how you arrange those words do matter, despite what the saying “It’s not what you say, but how you say it” seems to suggest.

A quick example of the WHAT mattering is those studies about copy machines and people standing in line.

What researchers found was that if people came up to the line and asked to cut the line, they found that if you gave a reason for needing to cut, people already in line would be much more likely to comply with the request.

And, this was true even if the reason was a terrible reason. As long as a reason was given (versus no reason), the rate of compliance was significantly higher.

This article isn’t about persuasion per se, but this study is just one tiny example of the importance of the WHAT.

Simply put, the words you choose to use (or don’t use) do make a difference.

The HOW consists of all the types of non-verbal communications there are, such as:

The HOW you say it makes the WHAT you say more powerful. Non-verbal communications should be studied and practiced by anybody hoping to become a speaker or communicator that gets and grabs attention.

But, I hate the saying “It’s not what you say, but how you say it” because this advice demeans and diminishes the importance of the WHAT you say.

In promoting the importance of the HOW you say it, the WHAT you say gets lost in this message.

Both of these things, the WHAT and the HOW matter. Don’t forget that.

It’s clear that the WHAT matters and the HOW also matters.

But, I alluded to something earlier that the advice “It’s not what you say, but how you say it” is incomplete.

So, I want to give you a new formulation for this advice.

Instead of “It’s not what you say, it’s how you say it“, here’s the new and improved version of this saying:

WHO you are is a huge part of whether people will listen and pay attention to you when you speak or communicate with them.

So, let’s talk about the WHO you are.

The WHO You Are

The WHO you are consists of five different things, the first being the most obvious one.

Status/authority is the first part of the WHO you are.

Status/authority is a large subject and beyond the scope of this article, but a quick example of it’s power would be a police officer telling you do something versus your kid sister telling you to do the same thing.

Who are you more likely to listen to and comply with?

The police officer, of course. And, that’s because he has authority that your kid sister doesn’t have.

Another element of WHO you are is the energy you have when you speak or communicate.

The higher your energy, the more people will listen to you.

The lower your energy, the less people will listen to you.

It’s rarely talked about, but energy is attractive to others and it grabs people’s attention.

What great speaker or communicator do you know that is not someone of high energy?

There aren’t a lot of them.

An example of someone famous who is both a great speaker and someone who has incredible levels of energy is Gary Vee. His energy just shines through all the time, which is why he is one of the most in demand, highly paid public speakers.

Authenticity is another way of saying congruence.

People are attracted to, and listen to, people who are authentic. Your authenticity (or lack of) determines a lot of WHO you are.

An example of someone who I feel is authentic is Joe Rogan, the podcast host, comedian, and MMA commentator/host.

Authenticity is about being real, being true to yourself, being vulnerable (at times), and always being congruent with who you are (and what you say).

People can tell when you’re just putting on an act.

People can tell when you don’t really believe what you’re saying.

And, they can tell when you are outright lying.

If you want to speak so that people give a damn, you need to be authentic.

Your vibe is the external representation of your internal STATE.

So, if you are excited, then you will come off that way.

If you are anxious, you will come off that way.

If you are passionate, your passion will come through.

If you are feeling mischievous, that will also show.

Whatever it is you are feeling, people listening to you can tell.

Whenever you speak, pay close attention to your internal state and your vibe. What state/vibe are you giving off? It will make all the difference to portray the right state/vibe.

One celebrity who I love and think has a great vibe is Craig Ferguson, the former TV talk show host.

He has a fun, mischievous, edgy vibe.

The fifth element of WHO you are is what I call the “X-Factor”.

Celebrities like Oprah Winfrey have this in spades. Oprah even talks about this concept from time to time.

Oprah is one of the world’s most well-known and well-respected communicators and speakers.

People hang on to her every word.

She is truly influential.

And, part of why she is so influential, persuasive, and captivating is the “X-Factor”.

She’s even admitted that it is this “X-Factor” that is such a huge part of her success as a personality, speaker, and communicator.

Well, I can’t tell you that.

If you want to find out what the “X-Factor” is, learn how to speak so that people give a damn, and learn how to get and keep attention when you speak, get a preview of my program, The Million Dollar Mouth: How To Speak So People Give a F-ck.

Previous Post Verbal Fluency Exercises: A Lesser Known Exercise Next Post How True Is The Saying “It’s Not What You Say, But How You Say It?”