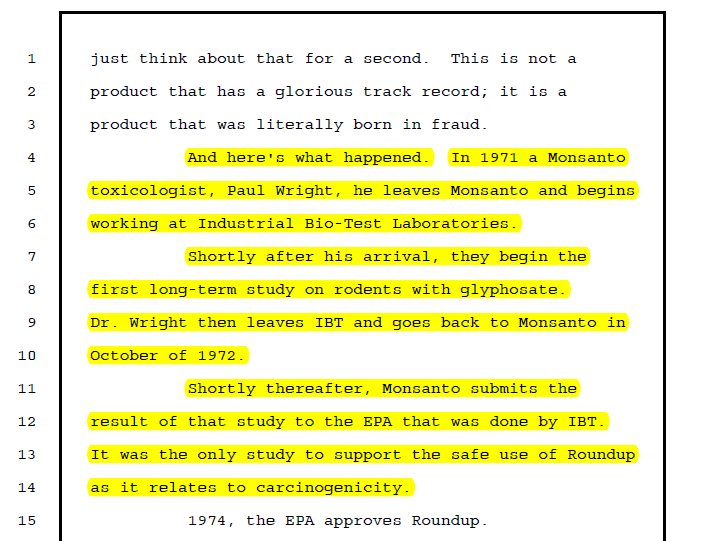 One of the biggest takedowns of evil corporations in history just happened. Monsanto, maker of Roundup weed killer (and inventor of the infamous Agent Orange), was ordered to pay $2 BILLION in compensatory and punitive damages to a husband and wife who both developed cancer using Roundup. Wanna know how their lawyers engineered this astounding, dramatic, and seemingly impossible David vs. Goliath takedown? Read on…

So, let’s recap what was at stake in the Pilliod vs. Monsanto case:

A husband and wife couple, the Pilliods, contracted non-Hodgkins lymphoma and claimed their cancer was caused by long-term exposure to Monsanto’s popular weed killer, Roundup.

Monsanto has insisted for over forty years that glyphosate, the key ingredient in Roundup, is safe and doesn’t cause cancer.

On May 14, 2019, a California jury handed out an unparalleled $2.055 billion verdict in favor of the California couple.

This was after asking for “only” $1 billion verdict in the closing argument.

The lawyers were so persuasive the jury ended up DOUBLING what they had asked for!

This verdict included $2 billion in punitive damages, which is almost 2.5x Monsanto’s annual earnings, intended to send a strong message to Monsanto about their atrocious behavior.

How The Lawyers Did It

In order to beat a company with pockets as deep as Monsanto, you better have serious game and you better know what you’re doing.

We’re talking about beating a company that was willing to (i) plant employees at outside laboratories to fake safety results, (ii) exploit “deep connections” in the EPA to classify glyphosate as non-carcinogenic, and (iii) use any means possible to discredit the WHO cancer research agency (and their scientists) when it was indicated they were going to classify glyphosate as carcinogenic.

As if that wasn’t enough, Monsanto also engaged in “ghostwriting” studies that promoted the safety of glyphosate while burying studies that found glyphosate harmful to human health.

At trial, all of these above mind-bending things were proven by the plaintiff’s lawyer, Brett Wisner, to have occured.

Frankly, I thought only companies in John Grisham novels did these kind of shady, evil things, but apparently not!

BUT…proving all these incredible revelations about Monsanto’s Machiavellian business practices was STILL NOT ENOUGH for Wisner to win this case!

The Most Difficult Part of the Case: “Substantial Contribution”

Even though all of this Machiavellian behavior was proven, Wisner STILL had to prove that the couple’s cancer was CAUSED BY Roundup in order to win the case.

Which was the hardest part of all!

(To be technical about it, the legal standard that applied was that Roundup had to be “a substantial contributor to the cancer.”)

Think about how complex that question is.

When somebody develops cancer or any other catastrophic disease, rarely is it as easy as pointing to a specific cause like diet, lifestyle, or something else.

We know that something has happened, but we rarely know why.

In order to prove (or disprove) this point, both parties could not just bring up dueling medical experts and have them yell out “Roundup caused the cancer!” and “No, it didn’t!” until they’re blue in the face.

So, how did Wisner go about persuading the jury about this crucial point? Here’s how:

So, what exactly is the persuasion technique I just described?

Wisner created a NARRATIVE, which is basically a STORY about his side of the story that ultimately was much more plausible than Monsanto’s “story” (and yes, I am using quotes on purpose).

Wisner’s narrative was that the couple didn’t know that Roundup was dangerous, so they didn’t protect themselves.

They used Roundup every day wearing shorts and t-shirts like they saw in the TV commercials, thinking it was harmless.

Yet, Monsanto employees were told a completely different story, they were all warned they needed to protect themselves when using Roundup.

The chance that both the husband and wife getting the same cancer was incredibly remote, so it was likely some environmental factor caused it, and in this case, it was the Roundup they used daily.

And, the spraying of the water in front of the jury was just to hammer home that this substance was unbelievably dangerous. I am sure some of the jury members got extremely frightened by what was suddenly in the air!

Meanwhile, it didn’t seem like Monsanto had much of a narrative at all.

Their lawyers appeared to have spent their time down in the weeds, instead of looking at the forest!

The Takeaway: The Persuasion Technique That Earned $2 Billion In One Day

When most people are persuading, they (like Monsanto) focus way too much on specific details and small points.  They’re focused on the weeds (no pun intended) and not the forest.

Most people don’t have a narrative in mind at all when they are persuading, which is why they’re ultimately not very successful in persuasion.

You’re always much more persuasive when you have a NARRATIVE.

The lesson here is: Make sure you create and have a plausible, and preferably, dramatic and emotion-provoking narrative when you are persuading.

REMEMBER THIS: WITH EVERYTHING VALUABLE AND DESIRABLE IN LIFE, PERSUASION SKILLS ARE THE ONE THING STANDING BETWEEN THE “HAVES” AND THE “HAVE NOTS”.

Honestly, it should absolutely BURN IN YOU to learn persuasion.

If so, check out this preview of my new persuasion and influence program called NPP: The “Non-Persuasion” Persuasion System.

NPP is a simple, three-step persuasion method that will give you Jedi-like abilities to persuade and influence.

NPP leverages time-tested, immutable principles of human nature to greatly enhance your abilities to persuade, but without ever having to resort to force, manipulation, shadiness, or sleaze.

I think you’ll love it and more importantly, it will change your life.